Lagoon by Nnedi Okorafor
My rating: 4 of 5 stars

It was a bit hard to read the Pidgin English as I don’t know what a Nigerian accent sounds like but I mostly understood everything said. What really tripped me up were the words from different languages that were sprinkled into the book. Fortunately, I read this book on my computer so I could Google words right away.

The Bad Beginning by Lemony Snicket
My rating: 4 of 5 stars

Listening to this book as an adult is different from reading it as a child. I already know how the plot progresses so each time they are stumped for answers, I know how to answer it. I wanted to scream out the answer so the Baudelaires could hear me but alas, they couldn’t because they are fictional characters.

However, now I have a lot of questions especially about the Baudelaire parents. Were those parents really as kind as the children are remembering? How is it that the entire fortune is locked up until Violet comes of age with no provision for the care of the children? Are the children supposed to starve to death while they wait for Violet to come of age? I know they didn’t expect to die before their children grew up but they had a will so that means that they planned for such a situation.

I know that in this book, the Baudelaire children are probably still in shock but I’ve read the rest of the series. If I were in their position, I would be very angry with my parents. How dare they die and leave me to fall into a series of unfortunate events? However, the Baudelaire children seem to be better than that. I think that’s why I’ve never really re-read the series even though I went to the effort of collecting all the books.

The Chrestomanci Series: Entire Collection by Diana Wynne Jones
My rating: 4 of 5 stars

As you can see, the more recent books were easier for me to read. I finished them quickly rather than taking days to read them.

I’ve never read this type of story before and after reading the first chapter, I almost didn’t want to finish it. However, there was one question I had so I continued reading. It only got answered at the end but there were other interesting anecdotes in other chapters. I don’t understand American football nor do I want to so the description of American football games lost my interest here and there. Fortunately, a play-by-play was not the focus of any of the chapters but a focus character within that specific game so I was able to follow along.

(view spoiler)[It was a bit upsetting to find out that my country is gone and all the people relocated. Where were we relocated to? Did some of the developed countries give up some of their territory to undeveloped countries that ended up being swallowed by global warming? I seriously doubt it. So what ghetto is the population of my country living in? (hide spoiler)]

Japanese is written with pictorial symbols called kanji. There are almost 2000 symbols used officially in most Japanese writing that children start learning from primary school. Naturally, it means that having novels packed with kanji would be incomprehensible to most school-aged children. So novels marketed to such children tend to use less kanji and simpler phrasing than novels marketed towards adults, hence the term “light novels”.

These are a few light novels that I’ve read and enjoyed. 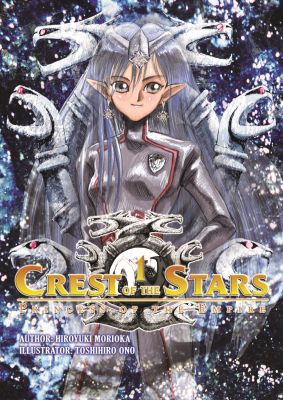 Crest of the Stars

A science fiction trilogy from the 80’s. It incorporates space opera elements such space ship battles and galactic empires but at heart, it is a coming-of-age story for two young adults. It was re-translated and published by J-Novel Club and is available at several ebook sites. 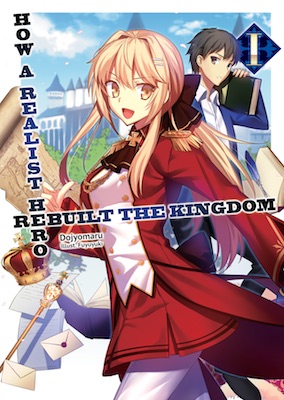 How a Realist Hero Rebuilt the Kingdom

Just as he was about to enter university, Kazuya Souma found himself summoned to another world by the king who cedes his throne to him. Now it’s up to Kazuya to usher the country into economic and military stability. This story is also translated and published by J-Novel Club. 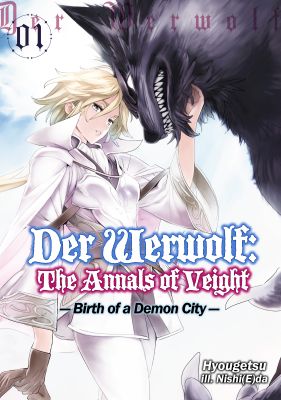 Der Werwolf: The Annals of Veight

As the Vice-commander of the Demon Lord’s Army, it’s up to Veight to help create a country where humans and demons can live in harmony. Fortunately, Veight is a reincarnated human so even though he is now a werewolf, he has a unique perspective to balance the differences between humans and demons. This story is also translated and published by J-Novel Club.

Incidentally, until the 30th April, J-Novel Club is offering some of its novels for free on Bookwalker.

You can read the first three volumes of Der Werwolf on that website for free. Click the campaign banner on the home page (in the link above) to lead you to the list of books that you can read for free.

Tarzan of the Apes by Edgar Rice Burroughs

It was interesting to read the original Tarzan. I only watched the Disney animated movie. A lot of details that were in the movie must have completely passed over my head as a child. It was only through reading the book that I understood them. I was surprised at the ending, though. I was expecting the movie ending so I was disappointed.

Seveneves by Neal Stephenson
My rating: 3 of 5 stars

All the science went straight over my head and the characters did not endear themselves to me. However, it was interesting reading their adventures in space. Everything else, I did not like.

The Perks of Being a Wallflower by Stephen Chbosky
My rating: 1 of 5 stars

I was only reading this book to fill out the banned books slot on my reading challenge. However, I read two parts and stopped. Not even the thought that there is only one month left before the year ends and I need to read a banned book could motivate me to continue reading this book. So I will choose another banned book.

It’s not that the story is boring. It’s not even the passivity of the main character. I like passivity. I am passive. It’s just… this book kinda reminds me of The Catcher in the Rye which I would never read again even on pain of death. If I was doing this book for literature, the only way I would finish it is because when I was in high school, we read books chapter by chapter in class. That’s how I finished Macbeth. I would never have even picked up that book in the unabridged version.

I get that it’s about high school life but I can’t relate at all. First of all, the book is set before I was born. Second, it’s in America and I can never relate to American high school stories. Lastly, the main character in this book just bothers me. It’s something that I can’t articulate but I don’t want to be inside his head anymore.

When the Earth Had a Moon by A.M. Cunning
My rating: 2 of 5 stars

If I hadn’t read Seveneves, I might have been more impressed. As it was, it was a rather underwhelming read. The political conspiracy in the background didn’t pique my interest either. Rather, it turned me off.

I am a mojyo according to this book.

The term mojyo can refer to a girl who:
1. Has no experience with dating men
2. Has never been asked out by another
3. Remains chaste

That’s on the first page of this manga which quite obviously piqued my interest. As the story progressed though, the differences between Tomoko Kuroki were clear. I am not painfully shy and socially awkward. I’m just introverted. However, that doesn’t mean that I can’t enjoy the story and I did! I also watched the anime for this so I expected to enjoy the manga and it didn’t dissappoint.